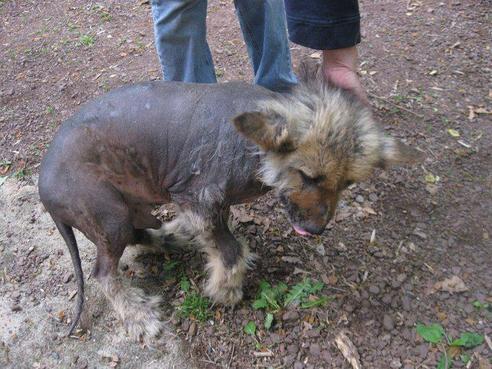 As a consequence of pituitary dwarfism, secondary hypothyroidism is seen in these dogs and this presents even more problems for them including weight gain as they age and hair loss over the whole of the trunk with the exception of the head and legs which is due to hypothyroidism giving the classical visual symptoms of hypopituitary dwarfism.   Hormones affect almost every organ in the body and the lack of which can play an enormous role in the temperaments of these dogs and there are a wide variety from dull and lethargic to an apparent normally behaving dog. Most of the veterinary literature available states incorrectly I might add that dwarf dogs tend to be dull and lethargic due to low levels of Thyroid Stimulating Hormone (TSH), in reality this is not entirely true a large proportion are just as active and alert as a normal dog and also just as trainable.

Thyroid Stimulating Hormone (TSH, thyrotropin) is a glycoprotein produced by the anterior pituitary gland and plays a major role in maintaining normal circulating levels of the iodothyronines, T4 and T3. The production and secretion of TSH is controlled by negative feedback from circulating T4 and T3, and by the hypothalamic hormone TRH (thyrotropin releasing hormone). The TSH molecule is composed of two subunits, α and β which are bound together.  The TSH ' α ' subunit is structurally identical to the ' α ' subunits of the related glycoprotein hormones (LH, FSH and chorionic gonadotropin). The ' β ' subunit of TSH and the β subunits of the related hormones are structurally hormone-specific, and are unique in their biological activities within the body.
Hypothyroidism is a common endocrine disorder in dogs, whereas hyperthyroidism is very rare. Canine hypothyroidism is usually a primary issue, involving faulty production of the thyroid hormones, T4 and T3, with elevated levels of TSH. Secondary or tertiary hypothyroidism associated with dwarf dogs is where thyroid hormone production is low as a consequence of a pituitary defect, and is a very low percentage less than 5% of canine hypothyroidism cases with dwarf dogs showing much lower levels of TSH than would otherwise be expected.

There are quite a range of symptoms associated with thyroidism but the differences between dogs can be quite large. It is also well known that hypothyroidism is one of the most common medical causes of aggression or abnormal behaviour in dogs and dwarf dogs are no exception, some can become aggressive over what would be considered rather trivial issues in normal dogs for example the touching of certain parts of their body.

This would be considered a behavioural issue in many dogs, but the very low thyroid levels tend to affect mood and sometimes it is difficult to tell the difference between aggressive behaviour due to thyroid levels and socialisation or training issues. Thyroid replacement therapy has worked well in many cases to relieve aggression in dogs with hypothyroidism. The hormonal imbalance while having a pronounced affect on some, does not affect all dogs in this way, my own dog and many others despite being untreated for dwarfism have not shown any problems with regard to temperaments despite being predisposed to it through by virtue of low levels of TSH. To determine the thyroid hormones present a series of tests need to be performed as a single test will not give a complete picture of their hormonal replacement requirements. Once the levels have been determined the treatment in tablet form is simple and quite successful using L-thyroxine.

Free T4  - T4 is an inactive hormone that is converted by the dog's tissues into T3, which is active. There are two types of T4 the first is a form circulated and bound to a blood protein, this is called bound T4, the second type is T4 moving around loose in the bloodstream called free T4. Free T4 is the only type that can enter cells and be converted to T3, the concentration of free T4 corresponds to thyroid hormone activity where it counts (i.e. at tissue level). Free T4 levels are less likely to fluctuations and give false low measurements than a total T4 level.

Thyrogl﻿obulin﻿ Tg - Thyroglobulin (Tg) is used by the thyroid gland to produce the thyroid hormones T3 Triiodothyronine and T4 thyroxine.

Treatment for Secondary Hypothyroidism
A typical thyroid replacement treatment is SOLOXINE® (levothyroxine sodium) which is given to dogs to replace their deficiency of thyroid hormone.

Ghrelin Test
The secretion of growth hormone (GH) is stimulated by sleep, high protein diet, exercise, and hypoglycaemia, among some other causes. A potent stimulus for GH release is a peptide from the stomach wall called ghrelin. In young dogs, ghrelin is more potent in stimulating GH release than is GH releasing hormone. Ghrelin can be used for the diagnosis of GH deficiency in suspected pituitary dwarf dogs and was used prior to the DNA test. If the ghrelin GH concentration is in excess of 5 μg/l rules out pituitary dwarfism. A ghrelin response of 5 μg/l or lower of GH tends to indicate pituitary dwarfism, but it is not an accurate diagnostic tool in itself as some 'normal' dogs cannot sometimes produce more than 5 μg/l at times and therefore will give a false positive for PD. Ghrelin is not an effective treatment for pituitary dwarfism ideally canine GH should be used but this cannot be obtained. Most but not all pituitary dwarfs must also be treated for secondary hypothyroidism, a small number will also have to be treated for secondary hypoadrenocorticism.

Progestin
This is used to stimulate the mammary glands to secrete GH and is sometimes used when other forms are not available, the coat should return but there are a number of problems with long term use by this means.

﻿﻿Thyroid Problems﻿﻿
The following are all clinical symptoms of hypothyroid problems seen in dogs which are extensive, as dwarf dogs have secondary hypothyroidism they can exhibit some or many of these symptoms particularly if left untreated.

﻿Note
﻿This discussion paper has been written to primarily promote awareness and debate on pituitary dwarfism and all of the dogs named in this paper have been published previously in other documents / websites and are in the public domain.
This paper is not intended to replace the advice of a Veterinary Surgeon; the medical knowledge contained is for general information purposes only.

Soloxine generally has few side effects, however some dogs are allergic to Soloxine and if a reaction occurs, cease use immediately and call your veterinarian. Long term treatment may possibly produce side effects in some dogs and Veterinary advice should be sought if a dog exhibits any of the following: