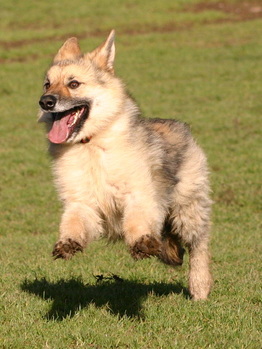 The University of Utrecht recommends that both male and female affected dogs are sterilised despite their very low fertility and there are a number of reasons for this:
Females
Firstly, female dwarf dogs are greatly delayed in starting their first season 14 - 18 months is quite usual, when they do start it is for a very protracted length of time often many months with heavy bleeding, much longer than a normal German Shepherd. Secondly this process takes a lot out of the dog energy wise as their cycles can be very irregular and more frequent, also unneutered females are very prone to urinary tract infections. Its also worth mentioning that some females dogs have been found to have a full size uterus which was not expected.
Males
Male dwarf dogs have been thought to be infertile but this is not entirely true as live sperm have been found with some dogs. The viability of these sperm have not been tested and no research to date has been carried out.

An added advantage is that most owners report both male and female coat regrowth after spaying and neutering as can be seen by the following images of the Czechoslovakian Wolfhound dwarf 'Yazhi':

However coat regrowth may not be permanent for some, the hormonal mechanism's for dwarf's are not fully understood as little research has been done in this area.﻿﻿ ﻿﻿
﻿
Surgery
﻿When undergoing a general anaesthetic an untreated dwarf dog has an underdeveloped renal system therefore they should be hydrated with IV fluids which are beneficial for blood pressure maintenance, to replace fluids lost during surgery, to accelerate the recovery process and to prevent﻿﻿ post-anaesthesia kidney dysfunction. The IV can also be used in the event emergency drugs are required during a procedure.
Drugs used on dwarf dogs

Rimadyl - This drug is used for Arthritis pain relief and inflammation and should be used with caution on dogs with liver and kidney conditions.

Download File
Previcox -  Used for the control of pain and inflammation of Osteoarthritis, soft tissue and orthopedic surgery, this should also be used with caution.