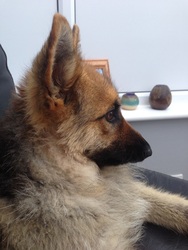 Pedigree Research
My pedigree research began with my own dwarf 'Max' kennel name Franziska Riley which I show below as an example to others that this problem started and involves the very top dogs of the German Shepherd world. It would be very easy to swamp this page with dwarf pedigrees and produce a site that would be very confusing for anyone to try and identify their own lines within it. The carrier rate is now at such a level that I doubt there are any lines that are entirely free from carriers in a pedigree such has been the impact of some VA1 and V dogs of the past on the breed population. The only way to check today is to do a DNA test on all breeding dogs.
sire: VA1 Eiko vom Kirschental schH3
sire: VA5 Yago vom Wildsteigerland schH3 FH
dam: V Quina von Arminius schH2
G.sire: VA1 Ulk  von Arlett schH3
sire: VA7 Fedor von Arminius schH2
dam: V Dolly von Arlett SchH2
dam: V5 Bambi vom Feldschlobchen 3


The full seven generation pedigree link below shows a large number of VA1 and V1 dogs behind him with links to the known dwarf producers published many years ago. (see John Walkers notes) 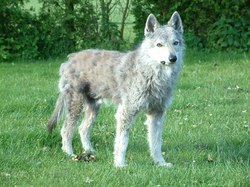 Tracking the PD carriers that were used to found this breed is very much work in progress. In all around 48 GSD's were used over a period of time up until 1983 and while everything was known about the Carpathian wolves used, some of the German shepherds were of variable quality and were not as well documented in terms of full details.  Beginning with the GSD sire: Cezar z Brezoveho Haje, born 27.3.1951, the full history of the breed can be found on many web sites, here we are trying to concentrate on identifying the German Shepherd carriers of dwarfism used in the foundation of this breed and publish them here.


What we do know is the names of a number of the German Shepherd males used such as:  V Condor vom Marderpfahl schH3 - DDR 42701 who is four generations removed from Rolf vom Osnabruckerland and therefore has to be consider at present  a suspected carrier.

The next German Shepherd identified and used was V Condo Falkenwappen schH3 SZ10217  b. 8.9.1959 appears unconnected to any known carriers of the time and therefore is expected to have been clear of the faulty gene.

In 1983 the last wolf x GSD occurred, the German Shepherd used was: V Bojar von Schotterhof schH3 DDR 77948 what is interesting is where he came from as he is a descendant of Condor and Greif, was he a carrier? highly likely when you consider the lineage. Using three German Shepherds from the same lines would only serve to reinforce the defect within the breed, had they outcrossed to other lines this defect in all probability might never of arisen.  As the pedigrees of other GSD's used become available more research will be done. The next stage to this investigation will be to check the Karelian Beardog another breed which was crossed significantly with the GSD post world war 2 to enhance the breed but also suffers from pituitary dwarfism.

Download File
Thank you to Mijke van Heyningen at the Wolfdog Organisation for his assistance and also to John Walker for his earlier pedigree research into dwarfism, which I have checked and used. 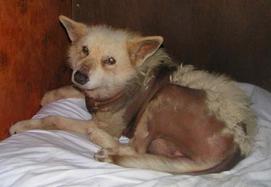